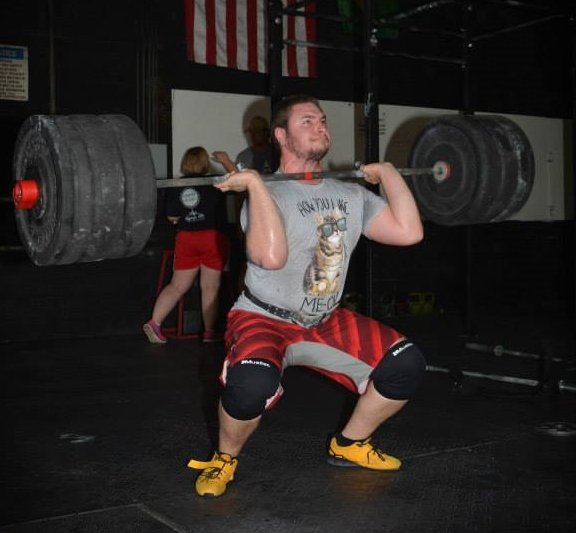 The year is 2012. After years of playing high school sports and staying very active, I found myself not continuing my athletic career into college. Along with not continuing playing sports I became very sedentary and my weight grew from about 190lbs in High School to around 235lbs in about a year. All the strength I had worked for, all the conditioning that I had done was gone. I knew I had to make a change. After deciding that I had to get a handle on my fitness again I joined the local gym. I went 6 days a week, 2-3 hours a night, and lost a total of 5lbs in an 8 month span and gained little to no noticeable strength. There had to be a better way. So one day while siting at home flipping through the channels on the TV I came across this weird sport on ESPN that I had never heard of and wasn’t completely sure what was going on. What I was watching was the 2011 CrossFit Games Killer Kage Event, the womens heat. This event was 3 Rounds, 7 of a 155# Front Squat, a 700m bike sprint, then the athletes had to go down and back 100ft of monkey bars with out falling off. Again I was watching the women. I was in awe with how powerful they were and how they could move that weight as fast as they could and then do other thing after the squats. I knew that any of those ladies would kick my butt any day of the week on my best day. Needless to say I was hooked from that point on. I continued to watch the rest of the events for that day and began my research into what this “CrossFit” thing was and how I could get started. After doing my research and contacting the closest CrossFit gym it wasn’t long before I knew that I needed to make this a part of my life. I joined my first CrossFit gym in April 2012. I saw more results in the first 6 months of CrossFit then I had in the last year and a half of going to a regular gym. I went and received my Level 1 in April 2013 followed by a USAW L1, CrossFit Kettlebell, and Crossfit Powerlifting. By this point I was coaching classes and beginning the steps to opening my own affiliate. In December 2014 I received the email stating that I was approved for my affiliation and almost exactly 3 years after starting my CrossFit journey, I opened the doors to my very own CrossFit box, Adelphos Athletics. The gym is still young but with the short time we have been open I have met and interacted with more people then I had every expected. As it has come to be a normal saying around the gym, Woo Fitness. Get You Some!